Connect with us :
Select Region:

Our GDS900 Glow Discharge Spectrometer (GDS) offers you state-of-the-art technology designed specifically for your routine elemental determination in most conductive solid matrices. User-friendly Cornerstone® brand software is brought to the platform for increased usability, simplified reporting, and streamlined analysis times—saving you time in your lab.

Glow Discharge Spectrometry (GDS) is an analytical method for direct determination of the elemental composition of solid samples. A prepared flat sample is mounted on the glow discharge source, the source is evacuated and backfilled with argon. A constant electric field is applied between the sample (cathode) and the electrically grounded body of the lamp (anode). These conditions result in the spontaneous formation of a stable, self–sustained discharge, which is called a glow discharge. The applied current is regulated by the power supply and the lamp voltage is held constant through regulation of the argon pressure. As soon as the plasma is initiated, inert gas ions formed in the plasma are accelerated by the electric field toward the sample (cathode). Through a process called cathodic sputtering, kinetic energy is transferred from the inert gas ions to the atoms on the sample surface, which causes some of these surface atoms to be ejected into the plasma.

Once the atoms are ejected into the plasma, they are subject to inelastic collisions with energetic electrons or metastable argon atoms. Energy transferred by such collisions causes the sputtered atoms to become electrically excited. The excited atoms quickly relax to a lower energy state by emitting photons. The wavelength of each photon is determined by the electronic configuration of the atom from which it was emitted. Since each element has a unique electronic configuration, every element can be identified by its unique spectrochemical signature or emission spectrum.

A spectrometer is used to measure the emission signals from the glow discharge. In order to ensure that the media within the spectrometer is transparent to ultra-violet light (160-460 nm), the entire optical system is purged with argon. Photosensitive Charge-Coupled Device (CCD) arrays are positioned at the focal plane in such a manner that the complete emission spectrum is recorded from 160 to 460 nm. The CCD arrays convert the spectrum into an electrical signal, which is digitized and processed to remove dark current signal, normalize the pixel response, extend the dynamic range, and eliminate pixelation. Since the number of photons emitted by each element is proportional to its relative concentration in the sample, analyte concentrations can be deduced by calibration with reference samples of known composition. 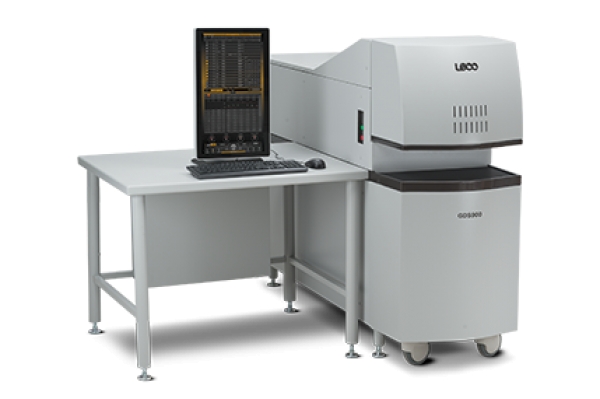